Boom! That’s how 2014 ended. The U.S. market continued its bullish streak (six plus years and counting) as the U.S. economy showed some really good signs of strength. Before we break down our stance on the global markets we need to recap the global returns from 2014.

As you can see in the table below, the U.S. market completely destroyed the rest of the globe in terms of market performance. The struggles of Europe worsened the last half of the year while Russia and Brazil’s own issues slowed down the Emerging Markets. The global markets as a whole as represented by the MSCI All World Country index (which many use as the global benchmark) lagged the U.S. again this year.

For the past two years the U.S. market has outpaced the rest of the global markets. Our economy, despite what you may see and hear in the press, is growing to the tune of 4.5 to 5% per year (in terms of real GDP). It seems as though good U.S. economic news keeps coming out each and every week. While all of this is great the important question to consider is will 2015 be another positive year in the stock market or will the six year bull-run finally come to an end?

As we break down each major area of the globe with our stance please understand that no one knows for sure what the market will do in 2015.

United States of America: It is our belief that the U.S. markets will continue to outpace the rest of the globe over the next year. We have no reason to believe otherwise. For our U.S. allocations we will maintain our overweight stance for the following reasons: 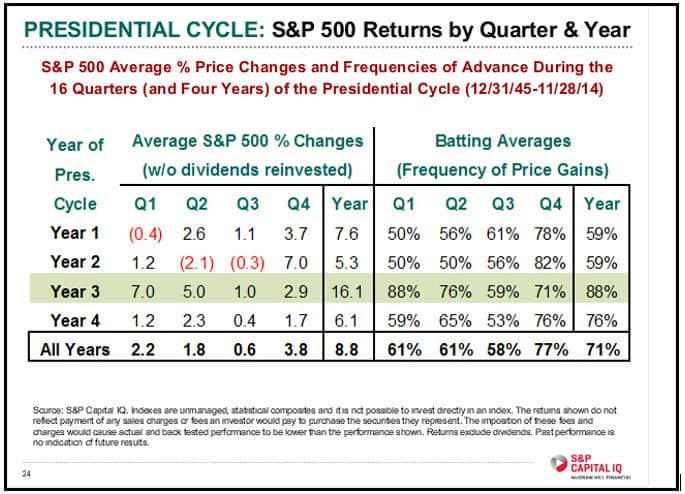 Our stance is the same as we last wrote it. We are underweight these areas of the globe and will remain so until we see some sort of positive growth news. Our eyes are on these Developed Non-U.S. markets simply due to the fact that it is cheap and hated. When things are cheap and hated is often when you find the best investment opportunities. However, we do need to see some sort of positive sign from these countries. We will not buy something just because it’s cheap . . . it may get cheaper.

Because of the strong headwinds the Emerging Markets are facing, we are under weight this area of the globe. It continues to trade at attractive multiples but until we see some sort of good news coming from the Emerging Markets (similar to what we are looking for in Europe) we will remain underweight.

As you start your path to investing in 2015, we at IGGA wish you a successful and prosperous New Year!