China is crashing. What should investors do?

The headlines have taken a turn the last few days. Greece was the focus last week with its default, its “no” vote to the referendum and its potential exit with the Euro. (We discussed Greece in detail in our market commentary video. If you haven’t watched it click here.)

This week the focus has been almost all China. We have talked about China before in this blog and the attempts of the Chinese government to prop up the stock market. For those unaware of what the government has done and the result, let’s start the conversation out discussing with a quick review of the past year and current situation in China.

China the past year and its current situation.

In the past year the Peoples Bank of China (PBOC) launched a program called “Stock Connect.” This program linked the Shanghai and the Hong Kong markets. This allowed foreign investors to invest in the local Chinese market through Hong Kong. It also allowed Chinese citizens the opportunity to invest in foreign shares by selling their Chinese shares (creating liquidity).

The Chinese government then went on a big marketing campaign pushing Chinese citizens and foreigners to buy Chinese stocks. This resulted in a huge increase in Chinese brokerage accounts and a stock market that increased in value over 100% in the last year. Everyone from the already wealthy to the cab driver in China  made a lot of money on stocks. A lot of these stocks  have no intrinsic value and valuations in the billions. People have taken margin loans and have levered up looking to take advantage of the euphoria of the market. (Does the 2000 tech bubble ring a bell?) It was the classic “euphoria” that Sir. John Templeton warned us about when he said “bull markets are born on pessimism, grow on skepticism, mature on optimism and die on euphoria.”

Now the past month the market has been hammered! Down over 30% and in “bear market” territory. Those margin loans are now being called which is resulting in mass selling no matter the underlying. The same type of situation occurred in the 2008 global melt down . . . the snowball is rolling down the mountain and it’s getting bigger and bigger!

To stop the snow ball from getting even bigger, the Chinese government has taken the following steps:

As a result of these policies (mostly the fact that you can’t sell Chinese stocks), the Chinese market popped today in a big way. The ETF that tracks Chinese A-Shares (mainland Chinese companies traded on Chinese exchanges) ASHR was up almost 19%!

With an understanding of the policies and situation the question now becomes . . . so what should investors do with China now? Should you jump in after today’s big move?

What should investors do now? 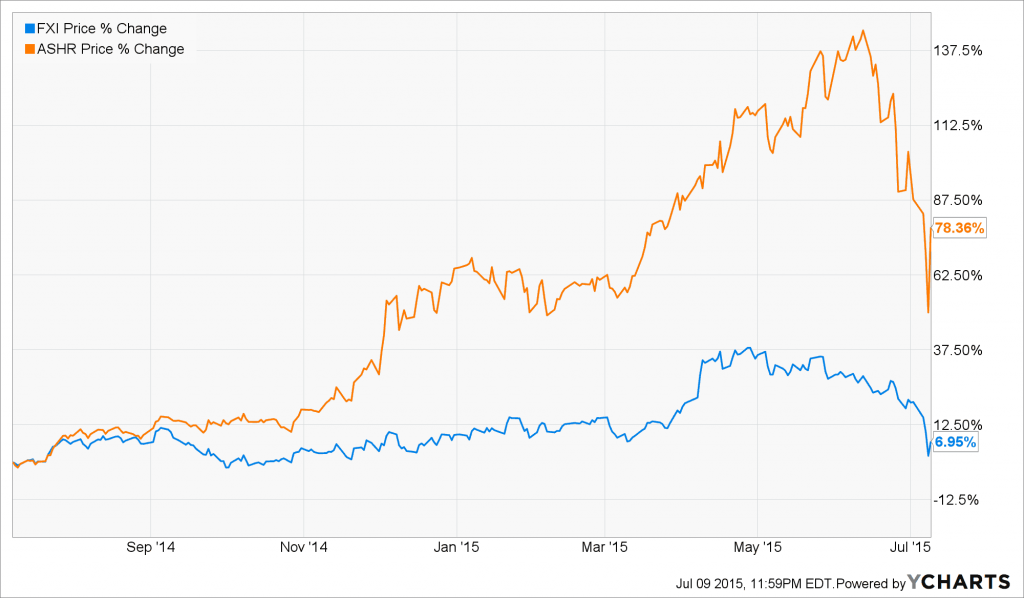 Finally, the last piece of advice I would offer is patience. There will come a time when Chinese stocks will be worth investing in again. I truly do believe that as the MSCI makes changes to their benchmarks and China continues to grow into a developed country, there will be big upside in China. It’s just waiting for that opportunity to come by being patient.

If you have any questions or concerns about China and how it may impact your portfolio, feel free to contact us. We would be more than happy to have that conversation with you.